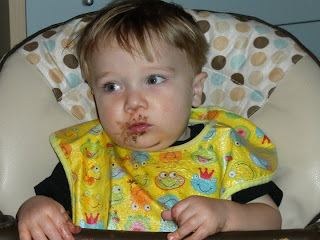 "Mom... can we sprinkle cheerios on top of my cake?"

Where did time go?!

Jan 2nd marked the year birthday of my little guy. While babies are supposed to grow up and become independent toddlers is just so hard to believe that he's becoming his own little person. He's walking when he feels like it, beginning to repeat words, getting frustrated when things don't go his way, eating almost anything, and dancing to any kind of music. I'm amazed every day when I look at him constantly learning and growing like a weed.

The beginning of this year was met with stress, anxiety and sickness. As the year was turning from 2010 to 2011 I was met with what the doctor said was stress and anxiety. While I've dealt with lots of this before I apparently let it get ahead of me. I was met with a stomach bug and then not being able to sleep. Thankfully the doctor gave me valium to help my body to remember to sleep and relax and I learned I need to let go and ask for help when needed.

Connor's birthday party that was supposed to be small and quiet but turned out large and loud worked out perfectly. Everyone we've been close with over the last year was there and I think I've made enough cupcakes to last a lifetime.

Shortly after, Connor became sick and we found out he had RSV. RSV is a serious respiratory illness that can lead to pneumonia, bronchitis and land its victim in the hospital with low oxygen levels. Thankfully we caught it before it became serious. We were left with a feverish baby, breathing treatments three times a day for a week and a half, and two exhausted parents. I did get to see some of Connor's first steps while I was home from work with him!

We ended the first month of this year healthy and with 3 extra teeth what we started with.
Posted by MommaSachs at 2/08/2011 No comments: