Grilling everything for dinner 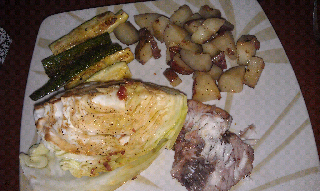 Enjoying the wildlife around you. 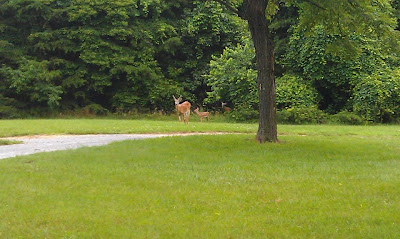 Email ThisBlogThis!Share to TwitterShare to FacebookShare to Pinterest
Labels: Just Me, Summer Daze 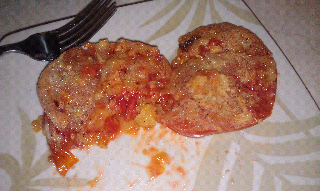 Somewhere Over the Rainbow

Seeing the Ukuleles at the Earth Day celebration on Monday had me thinking back to my wedding day.

I was SUPPOSED to come down the aisle to Somewhere Over the Rainbow by Israel "IZ" Kamakawiwoʻole. However... our DJ's were how can a say..... a big piece of shit not very good. They played the wrong Hawaiian song as I stepped up to walk down with a dad on each arm. What's the big deal you say?? Well... every bride about to get married has a vision of themselves walking down to their hubby and the music playing. So almost every day a month leading up to my wedding I was listening to the song and imagining what was to come. Its such a beautiful song.

So with it being a beautifully sung song and the emotions of not having played right in the moment when it was supposed to... I tear up every time I hear that specific rendition of the song. I'm actually a freakin mess if it comes on and I'm not expecting it. Like at the end of Fred Claus or 50 First Dates. Enjoy. I had a hard time getting fully load before playing. Maybe you'll have better luck.


Side Note: Just watched this allllll the way through and just realized they are spreading his ashes at the end. Kinda morbid... but...... yeah... its my fav song.
Posted by MommaSachs at 4/23/2013 2 comments:

Email ThisBlogThis!Share to TwitterShare to FacebookShare to Pinterest
Labels: Israel Kamakawiwo ole, Just Me, Somewhere Over the Rainbow 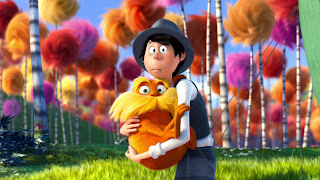 Earth day was pretty busy for us so I'm just now blogging about it. Connor really didn't have a concept of what Earth was up until a few weeks ago. I picked up a book from the library about Earth day.

Damn kid... you're smarter than I thought.

So yesterday when we woke up I told him it was Earth Day and after daycare and dinner we would go to the library for some Earth Day celebrations.

On the way to daycare we talked about what was on earth. Clouds, trees, people, animals, water, and Lightening McQueen (I'm sure you can guess who thought that one up).

We ventured over to the Riviera Beach Library Branch and had a great show put on the by Ukulele Ensemble from George Fox Middle School. Connor couldn't read the words to the music provided but he swayed to the music with me and mumbled through the chorus parts of the songs. In between songs the library read stories. Of course Connor's favorite book, The Lorax by Dr. Seuss was read.

At the end of it all they had little pots of dirt and you could pick out which seeds you wanted to plant. Due to the reading of The Lorax, Connor thought we were planting Truffula Trees..... I kept telling him it was squash.

When we got home from work/daycare today he ran over to his pot of dirt to look for a seedling, looked at me and said, "There's a Lorax in here, I just know it."

Hope everyone takes the time this week to get back in gear with respecting the planet and what keeps us alive and well from day to day. Take care of Mother Earth and she'll take care of you! Because........"Unless someone like you cares a whole awful lot, nothing going to get better. It will not."
Posted by MommaSachs at 4/23/2013 4 comments: 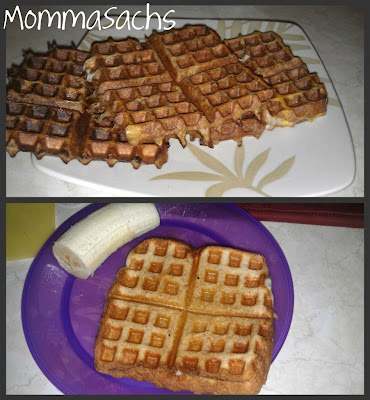 Before leaving on my AZ trip I was doing research on (aka googling) processed food and weaning them out of our diet as Connor was having major stomach issues. Then I was reading articles on food dyes and how they are banned in some countries and yet the good old U.S.A. allows them.

That got me thinking about food stuff I've never really paid attention too. I looked at the waffles that Connor eats almost every morning for breakfast with fruit. BOOM... red dye and blue dye. I looked at french toast sticks I had bought him for a while and BOOM.... yellow dye. I kept looking and and looking at everything in the freezer aisle. Package after package had food dye and other random stuff in it. Now... I grew up on Eggos and Toaster Strudels and turned out just fine. I also grew up on Apple Jacks and Fruit Loops... yep... that's me... just fine. Well mostly... I do have funky stomach issues to deal with off and on.

The only waffles I could find that were "all natural" were the waffles that stated natural/gluten free. That's great... but there's only 6 in a box and cost just as much if not more than the other brand of waffles I had been buying.

So.... I go out to AZ with all this turning around and around in my head. When Connor was a baby and starting on solids I made all his baby food. Jarred food did not come into our house. Why? Well it grossed me out and if I could just take the time in making it why spend money on jarred food? I also made batches of pancakes and french toast to freeze and grab for his breakfast. At some point... Connor got hooked on waffles and it was easier for me to just buy them then make up batches of the other stuff.

I talked these thoughts out with my mom during my trip and before I left she actually gave me money for half of a really nice waffle maker. As soon as I got home I ordered it and it was in our house in no time. So here I had this awesome, shiny, brand spanking new waffle maker... what do I do with it??? I've never made waffles before!!!!!

I tracked down a quick recipe online (god I love the internet) and swapped flour for gluten-free flour, added flax meal, used coconut milk rather then regular milk and then tossed some strawberries in the food processor and added them to the mix. WOWWOWOWOWOWOWOW were they good.

What didn't Connor like? He isn't a fan of the waffles! I've tried all sorts of different things since my first batch but I think he's partial to the red dots from old strawberry waffles and told my aunt at one point he wanted her to take the brown off of his waffles... I guess he's used to the yellow coloring? UGH. At least its a start.